How happy does the family in the illustration above look? Carryng food, children smiling, and seem to be enjoy life. During the 18th century, slavery was the reason blacks were treated as horribly was they were.  Through reading the text Oroonoko: Or, The Royal Slave by Mrs. Aphra Behn and analyzing the digital archive named The African Slave Family (pictured above) taken from a website titled, Slavery Images, both the picture, and text had numerous connections. Oroonoko, the novella tells how an African prince is tricked into slavery and is sold. There are many reasons why the text, and photo of The African Slave family can be connected. For example, in the phrase “The History of the Royal Slave” it is an oxymoron, and it contradicts itself. The phrase expresses that slaves were living a life that was bad, but not so bad, hence the word royalty. Slaves were treated horrendously and looked down upon with the most disgust possible. They were put on ships, packed together in a small space, and not to mention the diseases and sicknesses that came with them being packed together the way they were. Based on the way slaves were treated there is no way that they could be referred to as royal. According to the Oxford Dictionary, the definition of royal is 1 Having the status of a king or queen or a member of their family.

‘contributors included members of the royal family’ The people who bought slaves, and owned them, would be the ones considered to be royalty.

In the illustration titled The African Slave family, we see a family, who according to the tittle are slaves, but seem to be very happy in the photo. In Oroonoko, the narrator explains her feelings and thoughts about Oroonoko “He was pretty tall, but of a Shape the most exact that can be fancy’d: The most famous Statuary cou’d not form the Figure of a Man more admirably turn’d from Head to Foot. His Face was bit if that brown, rusty Black which most of that Nation are, but a perfect Ebony, or polish’d Jett.” (13) As the narrator explained how she felt about Oroonoko, it could be connected it the photo of The African Slave Family. It can be connected because, the narrator in Oroonoko, described him, and saw him in her eyes, to fit her liking, not to what he probably actually looked like. In Oroonoko, the slaves are portrayed as Europeans. However, in the illustration, the family does look like how slaves did look during this time. In the story, Oroonoko’s characteristics were very “whitewashed.” Whitewashed is a term in this case, used to described how the characteristic of a black person was changed, by a white person, to their better liking. Oroonoko was whitewashed in order to be liked by the narrator. If whitewashed, someone who was “too black” became a lighter skin tone, or better looking.  If the illustration was used a propaganda, it could portray an image of how slaves are treated in order to bring in more. For example, it was widely known that slaves were treated horribly, but if the illustration portrayed that slaves were living a good life, it might have others who were hiding out, to reconsider. In the illustration of The African Slave Family, since it has been written in history about how slaves were treated, seeing how happy the family was in the photo was very intriguing. It was intriguing because, it can be inferred that the family was happy being that they were around each other, but otherwise, slaves were very miserable and unhappy due to how they were treated. Furthermore, it has even been known for slaves to say they would rather die, than live the life they lived. 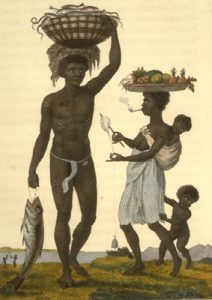 Shopping List Line Item: The Value of a Transatlantic Slave
Furniture. Groceries. Tools. Clothes. All line items on a person’s shopping lists; things to be…
2 years ago - by Ashley N Davis Previous
The Exploitative Behavior of Men in Literature and Reality
Picture this: An African American woman hung by one leg, half naked and exposed to…
2 years ago - by Jaideen Luciano
Next