Written by Jaideen Luciano
2 years ago

Picture this: An African American woman hung by one leg, half naked and exposed to everyone on the deck of the ship, as the men taunted and whipped her. She did not want to be stripped of her modesty but as punishment for refusing to do so, they exposed and whipped her regardless. The woman in the digital archive image titled “The Abolition of the Slave Trade” from The University of Virginia Foundation for the Humanities, was shamefully hung and exploited for her refusal to dance naked for the men on the slave ship. It was the very strength of this young woman that exemplified the struggle of being objectified during the slave trade. In the novella Oroonoko by Aphra Behn, Imoinda, Oroonoko’s love interest, is objectified and tossed around not only by the threat of slavery but also by the desire of the King. The beauty and modesty of women throws men into a frenzy of exploitation which can also be seen in the digital archive image I’ve chosen. Although Imoinda was described as strong and noble, her beauty is what captivated everyone, even “a hundred white men” all making passes at this beautiful African American woman. White men love the beauty and strength of an African American woman yet still exploited and used them as slaves.
Even Imoinda, a powerful and mighty black woman, was sold into slavery and made an object, similarly to the girl on the ship. Doesn’t particularly matter if you’re noble, beautiful, or a virgin. The desire for a pure woman is ever present, despite the race of a man. It’s a very common notion for a man to only desire a virgin, over a woman who has been taken by another man. For example, as soon as the King found out Imoinda was impure, his desire to have her was tainted. There’s something about a pure and modest woman that drives men insane which perfectly explains why the King lusted over this, “long’d for virgin” (158). It’s a common theme that women of modesty and virtue are desired, such as the woman on the ship. I find both pieces to be similar in the sense that women are subjected to be a slave to the decisions and desires of men, literally and figuratively. The woman on the ship desired to stay modest and not give into the desires of the white men which completely backfired– why is that? Men simply cannot fathom a woman having authority over themselves and their body, let alone an African American woman.
Both pieces raise questions for me, first question being, why exactly do men feel like they obtain ownership over a woman when it comes to her purity? Why did the enslaved black women have to suffer MORE sexually by becoming objects to random white men, slave owners and more? It’s an unfair yet awfully common theme that has shown up even NOW, in this century. Both pieces show just how serious the objectification of African American women really was. Not only were African Americans seen as property in GENERAL, the women were used for work, babysitters, pleasure, cooks, maids, etc. from the moment they were even born. The purpose of viewing these digital archives and reading 17th and 18th century literature is to gain knowledge of a strong black woman’s past, seen through the struggles and exploitations of the African American women in the 18th century. 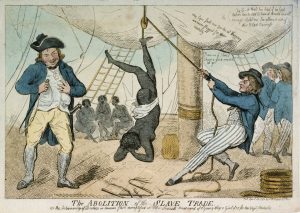