Furniture. Groceries. Tools. Clothes. All line items on a person’s shopping lists; things to be bought from various vendors. They are inanimate objects of possession and at times status symbols. In today’s Western paradigm, these items have nothing common with people. The idea of a person being grouped together with any of the item listed above would not cross the minds of most people. Yet starting in the middle of the 15th century – and for the next four hundred years to follow – African people were taken from their homes and sold into slavery. During this time these enslaved people warranted no more regard than the tools one purchased at the market. Slaves were only as good as they were profitable. Once a slave owner had no more use for a particular slave they have generally cast aside that slave much like a broken hammer or damaged toy. Rather than live a life as someone’s object, many slaves felt it was much better to die. In Aphra Behn’s 1688 novella, Oroonoko, this notion of choosing death over being bound in slavery is a central theme. This sentiment is highlighted further in a 19th century 24 x 18 9/16 x 8 ½ inch wood carving of a male slave trader and female slave currently on exhibit at the Smithsonian’s National Museum of African American History and Culture.

To illustrate this sentiment, the reader gets a strong sense of how Oroonoko’s people feels about being sold to strangers as slaves, is when Imonida has just been sold by the old King. He was enraged to discover Oroonoko and Imonida consummated their relationship. He originally planned to kill her but, “Order[ed] [Imonida and Onahal] should be both sold off, as Slaves, to another Country” (26). It was considered a “cruel” sentence and a fate worse than death. This point made clear when after having a moment of clarity the old King realizes that he needs to reconcile with his nephew, and instead of revealing Imonida’s true fate, he has news sent that Oroonoko’s beloved has been killed. The old King knows that Oroonoko would accept that over the idea of her being made a slave. Later in the tale, when Oroonoko is made a slave the reader see that from the very beginning Oroonoko resist the idea of being captured. While on the boat he would rather starve and die than be considered the property of someone else. It is only when the captain claims he made a mistake in capturing Oroonoko and promises to free him and his men does Oroonoko eat. Unfortunately, for Oroonoko this was all a ploy to get him ashore in good condition to be sold. Then in Oroonoko’s final act – after discovering that while he and his family live more privileged lives than the average, they would forever be slaves – he killed his beloved pregnant wife and had plans to kill himself.

With this in mind, when one considers the fact that slavery is a part of Oroonoko’s culture in Coramantien, it is a wonder why he has such strong feeling regarding slavery. However, upon taking a closer look the reader gets the sense that slavery in Coramantien is handled differently than elsewhere. When the old King was considering how he slighted his grandson, it was not just that he sold Imondia into slavery but “to another Country – either Christians, or Heathens; t’was no matter where” (26). This helps us understand why the other slaves on the plantation fell at Oroonoko’s feet even though “he was the Prince who had, at several times, sold most of ‘em to these Parts” (36). There was still a respect and understanding held between the Prince and the slaves. The possible reason for this distinction can be found in Oroonoko’s rallying speech to encourage the slaves to fight back in Surinam: “shou’d we be Slaves to an unknown people? Have they Vanquish’d us Nobly in fight? Have they Won us in Honourable Battel” (52)? Though slavery is  an aspect of Coramantien culture, there is still a level of honor to be had. Furthermore, if the treatment that Jamoan received after being captured and enslaved by Oroonoko is any indicator of how slaves are generally treated, at least in Coramantien slaves are still regarded as people.

In comparison, the same cannot be said for the slaves taken by unknown people. Examination of the Smithsonian’s artifact highlights this. 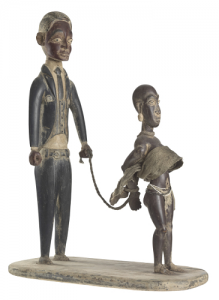 In this piece, both slave trader and slave are standing upon a long oval-shaped platform. The female slave is considerably smaller than the male trader and stands in front of the trade. The slave is dressed sparsely and bound. The cord keeping her bound both wraps around her neck and ties her hands to her back. Her ears are adorned with light colored earrings, and she wears a light-color breechcloth and four strings, two light and two dark, of glass beads around her waist. There is a piece of light-colored clothed tied around her upper torso, however, it is worth noting this piece of clothing is removable. Some of the other angles available show her upper torso completely nude. By comparison, the trader is fully clothed in a three-piece suit complete with a belt that has a buckle. The vest of his suit has five black buttons on it. He has on a white collared shirt and black tie. There are small white items in both his right and left breast pocket. His left hand is formed into a fist, while his right holds the rope that has the woman bound. The fact that he has a leash around her like a dog and does not bother to cover her up more effectively shows how little he considers her. Her only value comes in how productive and enticing she can be. It will determine her profitability.

In short, it is better to die than become a slave. As examined in Oroonoko, the hero preferred death over being degraded and stripped of his humanity. The mere thought of their own child being born into such a lifestyle forced Oroonoko and Imonida to make the devastating choice that resulted in Oroonoko killing Imonida while she was still pregnant. Although to have no say over their own lives or that of their offspring, they probably felt like they were already dead. Not only did their lives belong to someone else but their lives were deemed less, subhuman at best. Knowing this had to be particularly difficult for that because they had once been free. While no form of slavery is acceptable (or better than another), it really must have been harder on those that were not born into slavery. It was the once-free Oroonokos and Imonidas that knew what was missing; what they lost. To have been free and then be regulated to something comparable to a household tool had to kill a bit of a slave’s soul. With that being true, why not feel the body? At least the soul would be free.