Written by Latoya Middleton
2 years ago 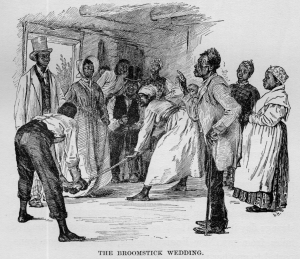 During the 18th century the cultures and belief were sacred. Equiano describes his african customs relating with clothing, food and religious practices. Olaudah Equiano’ The Interesting Narrative” emphasizes beliefs and cultures expressing his customs in weddings ceremonies. Equiano custom in wedding ceremony correlates to the image called Wedding Broomstick because they both illustrate their cultural customs .
Equiano was born in Eboe,the kingdom of Benin, which is in part of Guinea. Marriage was important to the people in Eboe. Based on Olaudah Equiano” The Interesting Narrative” the mode of marriage ceremonies both families arrange the marriage when young by their parents. On the occasion a feast is prepared and the bride and groom stand up in the midst of all their friends. The groom declares she to be looked upon as his wife that no other person is to pay any address to her. Then wife is brought home to her husband and another feast is made and brides parents bring her to her husband with a number of blessings and while that’s going on they tie round her waist a cotton string of the thickness of a goose quill. Only married women are only permitted to wear this to show they are now considered completely his wife and at the same time a dowry is given to the married couple which consists of portions of land, slaves and cattle, household goods, and implement of husbandry. This is given by friends of both parties. Also, the parents of the groom present gifts to the bride after she favored the sole property of her husband. After the ceremony is ended the party begins celebrated with bonfires along with music and dancing.

In Wedding Broomstick it illustrates a couple holding hands getting married surrounded with friends and a preacher he has a finger up as if he was trying to make a point about something which was a servant based on the information.  All the attention is on the couple and there are two people which could be slaves holding a broomstick below the couple’s knees. According to historian John Blassingame states that in slave marriages they had to get permission from their masters.(startum.com) The custom of slaves marriages jumping the broom made slaves feel more married. Similarly, the Eboe’ custom was the string of cotton of goose quill around the waist to feel more married as well.  In some cases, slave owners would have a white minister or a black plantation preacher to perform the ceremony. There are similarities with Equiano wedding customs and Wedding Broomstick where attention is made on the couple and Equiano states the groom looks upon at his wife, and that no other person is pay any address to the bride.

In the same way that this illustration documents these cultural customs, Equiano also in his The Interesting Narrative documents the cultural customs of his Eboe people from his native country in Africa.Equiano states that “We are almost a nation of dancers, musicians, and poets.” “Thus every great event, such as a triumphant return from battle, or other cause of public rejoicing, is celebrated in public dances, which are accompanied with songs and music suited to the occasion”(Equiano pg.34)

These culture and beliefs are still in practice today but with different variations. In some african american weddings they still carry the tradition of jumping the broomstick.This is amazing to hear these traditions started around 18th century. For instance, after the wedding ceremony is ended we call our festival a reception with friends and family along with music and dancing just like the Eboe people and the slaves in the illustration. The illustration  The Wedding Broomstick is from The University of Virginia foundation for the humanities archive.

Racism Follows
This is a black and white photo of rapper Nas below the Queens Borough Bridge…
2 years ago - by Jennifer M Previous
Walk A Day His Shoes And Find They’re Laced With Irony
“…All things work together for good to those who love God, to those who…
2 years ago - by Philip Perry
Next