Written by Philip Perry
2 years ago 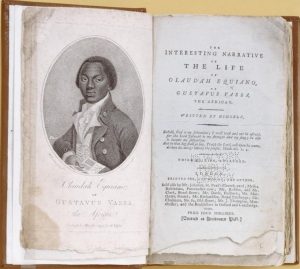 “…All things work together for good to those who love God, to those who are the called according to His purpose” (New King James Bible, Romans 8:28).

The Schomburg Center for Research in Black Culture, Manuscripts, Archives and Rare Books Division, has a digital archive in which you will find a photograph of Olaudah Equiano’s book An Interesting Narrative Of The Life Of A Slave (1794). An Epigraph of scripture is found on the inside cover of the book, in which he quotes from the book of Isaiah declaring that God has “…become [his] salvation”. Christianity (the religion of the people who enslaved him) made a huge impact in the narrative of his life. We find strong themes of Christianity throughout this text which are unavoidable. It is so Christ-centric in nature that it can be read as a Christian coming of age story. By close examination of this object in light of the written text, we will find that Christianity helped Equiano to be somewhat thankful for his slavery.

When looked at in closer detail the archive photograph appears to be the inside cover of Olaudah Equiano’s The Interesting Narrative of The Life of Olaudah Equiano or Gustavus Vassa, The African. These words are printed on the right side of the book in all capital letters. We also find the words “WRITTEN BY HIMSELF”. Showing that Equiano took pride in his education. Following the title we have an epigraph in much smaller print. This appears to be a quotation of Judeo-Christian biblical scripture, from Isaiah chapter 12 verses 2, 4. Below the epigraph, in small print and all capital letters, appear the words “third edition, enlarged”. After that we see the words “London” and “printed for and sold by the author”. Finally, we see, in much smaller print, a long list of Anglo names and organizations names following the words: “Also sold by”. The price of the book is then listed as “four shillings” following the list of names. On the opposite side of the book we have an engraving of Equiano. The features of his nose and lips are very prominent. His hair is neat and well-groomed. His gaze is directed toward the reader and quite focused, yet at ease. In his right hand, there appears to be a bible opened to the book of Acts chapter 4.  His garb reflects colonization and is quite sophisticated.

While all aspects of this object are thought provoking, the epigraph of scripture taken from the book of Isaiah Chapter 12, Verses 2 and 4 are the most significant: “Behold, God is my salvation; I will trust, and not be afraid: for the Lord Jehovah is my strength and my song; he also is become my salvation” (King James Bible, Isa 12,2) and “And in that day shall ye say, Praise the Lord, call upon his name, declare his doings among the people, make mention that his name is exalted” (Kings James Bible, Isa 12,4). I believe that Equiano chose these passages because they became the Magna Carta of his life. He found his identity in his Christian life and loved God and the Bible more than anything. At the moment of his conversion he is able to see, in hindsight, that the events of his life were all God’s providence. For these reasons I believe he was grateful that he had become a slave.

After his voyage to the North Pole, Equiano is inspired by the perils he survived to “…seek the Lord with full purpose of heart”. This leads to his conversion in which he expresses what can be interpreted as gratitude for “every leading providential circumstance that happened…” to him from the day he was taken and enslaved to this moment of conversion (190). He even says that the “hand of God… guided and protected” him even though he was not aware of it, and considered himself “a great debtor…to sovereign free grace” (190). For Olaudah, all of the pain and suffering he went through as a result of slavery was worth it, because it lead to him learning of His Savior. It lead to him learning of Jesus. I don’t have to venture very far to say that he would do it all over again if it meant that he would come to this heart melting realization of God’s love for him. This articulation of thankfulness is concluded by the remarks: “Now the Ethiopian was willing to be saved by Jesus Christ, the sinners only surety,…” (190). The most pregnant of all the words in this quote is the word “now”. Now, after being stolen from his family at the age of ten. Now, after painfully separated and reunited with his sister, only to have her taken from him a second time.  Now, after witnessing the horrors of a slave cargo ship. Now, after nearly losing his life at sea. Now, and only now he was “willing to be saved.” It is clear to see that Equiano considers these painful and traumatic experiences absolutely essential to his conversion experience. And, I would even venture to say he felt they were God ordained. He believes, like it says in Romans 8 that “all things work together for good.”

When we consider Equiano’s Christian conversion upon closer analysis, it appears a little too ironic. The religion introduced to him by the very people who kidnapped and enslaved him, becomes the thing that brings him the most peace and fulfillment in life. And, on the other side of the coin, we find captors who profess to be christian yet betray their words by their deeds. They treated human life with disregard simply because these humans were a different complexion. If they were genuine in their Christianity they would see brothers and sisters created by the same God who they believed created all. It spite of the animosity displayed by these Christians Equiano found something to be desired in their religion and bible.

The implication that European colonizers gave Christianity to today’s culture of black people is a dangerous one. It has the potential to give Anglo-people the feeling that they did blacks a favor by enslaving us. That we could have never found salvation through Christ without their savage intervention. Perpetuating the presently floating ideas of some Anglos, saying that bringing blacks to America was some huge benefit. Thinking they afforded us the “opportunities” had in being descendants of slaves now born American citizens. It implies that if left alone, we could have never thrived as a people in our own country, using our own resources, finding our own religion, and worshipping the same God and valuing the same virtues. Enslaved and freed blacks in the 18th century converted to Christianity in order to find salvation and redemption and perhaps to make sense of their past. They needed something to justify the atrocities they faced as slaves.  It’s ironic to think that slavery was the only path to the freedom they found in Christianity.

“If the Son [Jesus] therefore shall make you free, you shall be free indeed” – John 8:36 (KJV Bible)