Written by Dainnalee Tavarez
2 years ago 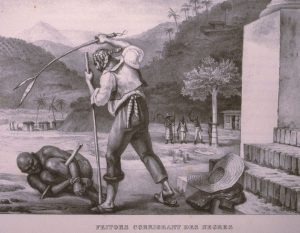 The un-justice of slavery began in the early 1400s and was abolished around 1865. What would be the reason for overseers to dehumanize people of color? The burden of being a slave caused mistreatment and ridiculed punishments. African-Americans faced oppression based on the color of their skin.  In the novel, Oroonoko Or, The Royal Slave by Aphra Behn, is a tragic love story and discusses the bizarre events Oroonoko endures as a slave. Oroonoko’s objective is to have his wife Imoinda and his unborn child not to be born into captivity. Slaves underwent strict restrictions; in consequence, if they did not comply with the rules they got penalized.

The illustration from the book “Voyage Pittoresque et Historique au Brésil (Paris,1834-39)” by Jean Baptiste Debret, is presented to the audience under the category of Physical Punishment, Rebellion, and Running Away. The name of this digital archive is called “Whipping a Slave, Brazil, 1816-1831.”  There are two slave’s being gruesomely mistreated. One of the slaves is tied up to a tree and being hit with a whip by an overseer, and we can assume that this slave tried to rebel and therefore received the most brutal punishments.  The other slave has a piece of wood in between his legs with his hands tied together forcing him to be curled up in a fetal position. There is another overseer on top of him ready to brutally beat him with a whip. Both slaves that are being punished look miserable. Their facial expressions depict how much pain they were in. The slaves presented in the image are half naked, only wearing pants. Imagine being whipped with no shirt on? Did these overseer’s have some type of satisfaction beating up slaves? When viewed by us in the 21st century this image brings disappointment to know the cruelty African-Americans went through back in the day.

According to Oroonoko, “Bound them to two several Stakes, and Whipt them in a most deplorable and inhumane Manner, rending the very Flesh from their Bones; especially Caesar, who was not perceiv’d to make any Moan, or to alter his face” (57). Oroonoko and his friend Tuscan were whipt and punished by the deputy-governor Byam. Byam lied to Oroonoko and told him that he and his family will be free and sent to Africa only if he surrenders. Instead he sought for Oroonoko and Tuscan to be brutally whipped. Oroonoko states, “almost Fainting, with loss of Blood, from a thousand Wounds all over his Body; from which they had rent his Cloaths, and led him Bleeding and Naked as he was; and loaded him all over with Irons; and then rubbed his Wounds, to complete their Cruelty, with Indian pepper” (57).  Being an African Prince he still faced extreme punishment. Deputy-governor Byam ordered to put Indian pepper all over Oroonoko’s wounds to make them hurt more. This quote expressed the idea of brutal punishment and the ridiculous pain encountered by slaves.

Both the archival object and Oroonoko’s narrative demonstrate the penalty slaves withstand. The illustration of slaves being whipped by overseer’s shows a big comparison of what happened in Oroonoko’s narrative. Slaves were tortured against their will, resulting in a traumatic situation. The consequences slaves faced due to not complying with the rules is considered unjust in today’s society.

Exploitation and Its Victims
It doesn’t matter how remarkable a slave was, that person was still just property. The…
2 years ago - by Joel Hinojosa Previous
Whipping: A Physical Punishment of Slaves
The archive at the University of Virginia for the Humanities, “Slavery Images”, displays an illustration…
2 years ago - by Natalee Sibley
Next