Written by Natalee Sibley
2 years ago 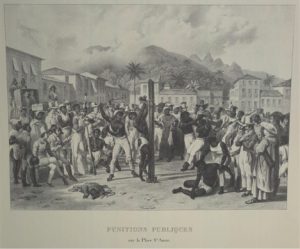 The archive at the University of Virginia for the Humanities, “Slavery Images”, displays an illustration entitled, “The Public Whipping of a Slave in Brazil in the 1830’s”. The picture shows the most striking feature of a male slave, stripped of his clothing, and tied to a post or stake in the middle of the town’s square. The man is being brutally and humiliatingly whipped by another black man who is most likely a slave himself with a whip called the “cat-of-nine tails”. In the middle of all this torture, the town’s people, both black and white, assumedly, slaves and masters, have gathered and are watching this unmerciful spectacle. The physical punishment shown in this archival illustration speaks to and mirrors the harsh physical punishment Oroonoko received when he tried to lead a slave rebellion in Surinam in the eighteenth-century text entitled, Oroonoko by Aphra Behn. Aphra Behn’s Oroonoko, and the archival illustration detail the politics of slavery as they both present a humiliating position of slave versus slave as one is viciously made to beat another.

As displayed in the illustration, slaves were publicly punished by whipping during the eighteenth century in order to teach the accused or guilty slave a lesson, as well as to set an example for the other slaves on the plantation. In Behn’s novella, after Oroonoko had led the rebellion in his quest for freedom for himself, his wife Imoinda, their unborn child, and the other enslaved black people, he was “…bound to [a] stake and whipped…in a most deplorable and
inhumane manner, rending the very flesh from [his] bones…and to complete his rage, he saw everyone of those slaves…now had a whip to give him some lashes” (58). Here, Behn paints a detailed image which exposes slavery as being evil and deplorable. Behn also gives the reader a deeper understanding of the pain and humiliation that slaves underwent through this type of physical punishment. The archival illustration illuminates this passage in the text and allows the reader to connect visually and verbally with both the text and the illustration. However, in Behn’s novella, the harshness of this punishment evokes deeper emotional feelings in the reader of both anger towards the white slave master and sympathy for the slaves.

The whip that was used to do such damage to the slaves was called a “cat-of-nine tails”. It was a whip that was woven and flowed into nine separate pieces. Each piece had a knot in the middle, and broken glass, and nails at the very end. This whip was once used by the Romans on their slaves, and it was what the white masters used on their slave years later. This was a cruel and savage way of punishing people. It gives thought to the ironic way of how white slave masters saw the slaves as savages, and yet dispensed such ‘savage’ punishment to the slaves by whipping them unmercifully, even while allowing others to watch. It begs the question of whom would the word ‘savages’ most likely be suitable for? –the slaves or the slave master? And under those conditions, why did not the slaves unite and overthrow the white masters? It could have been done. They did it in Haiti.

WORK CITED
Behn, Aphra. “Oroonoko: Or The Royal Slave”, Published by Feedbooks, 1688. Print.
“Public Whipping of a Slave, Brazil, 1830’s” as shown on www.slaveryimages.org, compiled by Johan Moritz Rugendas and sponsored by the Virginia Foundation for the Humanities.
University of Virginia Foundation for the Humanities, “Slavery Images”: www.slaveryimages.org/images/collection/large/NW0202.JPG