Written by Cristian A Tejeda
2 years ago 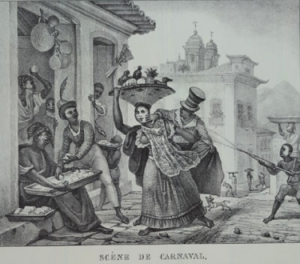 It is impressive how much depth an image can have. As I was looking for images, i encountered the “Entrudo,” which I initially taught was simply entertainment for black people. However is always important to connect all the information we have so we can see a much better picture. and looking back, I’m not sure all writers would agree.

The image is about a type of carnival called “Entrudo.” According to the comments, in this carnival African Americans were able to release some tension without challenging the social structure. In this carnival, it was acceptable for slaves and free women to play pranks and tricks on friends, and families. Some of the tricks were to spray water at people with fancy clothes. Others dunked each other with water.

In the image we can see an African American child spraying water at a woman. The women has a bowl of fruits on her head. I can’t tell what type of relationship the boy and the women have, but according to the comments if the someone is spraying water to another person they probably know each other. There is also a man trying to move her out of the way and some men around the area.

Ironically, this portrait opens up a lot of questions about the story “The interesting life of Olaudah Equiano.” Equiano was a man born in Nigeria and was kidnapped when he was eleven years old. He was then owned by a slave ship captain called Henry Pascal. Afterwards he was sold to a merchant called Robert King. Working as a merchant, Equiano was able to save enough money to buy his freedom.

The portrait is similarly described as the wedding ceremony from Equiano’s tribe “We are almost a nation of dancers, musicians and poets. Thus every great event, such as a triumphant return from battle, or other cause of public rejoicing is celebrated in dancing” (34). Reading from many former slaves, culture is probably the first thing slaves lost. When Equiano talks about the wedding ceremony he speaks with pride about his culture. But when he is taken, that pride is striped with his culture. And replace with a culture that undermines and represses him. Psychologically speaking this is the point in which the person becomes a slave. Everything you were is no longer needed and everything you will be is another person. I initially enjoyed seeing an image of African Americans celebrating, but what they celebrate is what they were told to celebrate. And forget their culture.

The Entrudo, for example, is a carnival with Celtic origins. Is possible that this tradition was able to reach Africa from another medium, but once again it became a necessity from slaves instead of a choice. For me as an immigrant, I had the choice to come over to the United States and still follow my people’s tradition. But for African Americans they never had that option. They never had that freedom.