Written by Darliss Cruz
2 years ago 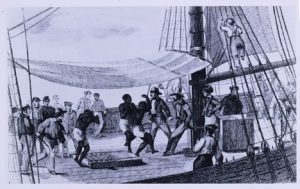 Throughout history, many Africans expressed and physically showed the hardships they faced through slave trade. They endured labor-intensive work in plantations and also worked for other people. These struggles have been documented through pictures and works of literature that attempt to make it to the surface of the untold truth. After countless of suffering and being overlooked for more than 300 years, these voices have been heard in 17th century digital archives and published texts by the 18th century poet Phillis Wheatley.

The New York Public Library archive “Forcing Captives To Dance” shows how slaves were used as mockery and entertainment. They traveled on sea, while the rest were on the bottom of the ship experiencing horrid conditions. Before men boarded the ship, they were examined to determine if they would be able to endure the hard labor that was ahead of them. Slave owners treated these innocent individuals horribly, and slaves would get ridiculed as a form of amusement. Slaves were not taken seriously because to the owners they were only good for work and entertainment. They were not seen as human but as property. They were sold for money, they were sold for land, and they were also sold into families that were not of their own. In the hands of slave owners these individuals lives were worth scraps. The fact that they were being “forced” to dance is shown in their facial expressions. Conditions on board for slave ships were atrocious. If these individuals did not agree to dance they would be whipped and experienced all kinds of punishments like being tied in shackles, placed in various contraptions and also being hung left to die. Surviving the long and challenging voyage depended on luck and for some, or divine providence.

Phillis Wheatley’s poem “On being brought from AFRICA to AMERICA” speaks to slaves that went through the similar situations. Her poem is a disguise and a quietly stated complaint against the evils of slavery. The majority of slaves were religious, believed in God, sought him and Christianity for relief with the hardships that they faced in this journey. Her poem highlights, “‘TWAS mercy brought me from my Pagan land,” (1). This discourse shows how she was brought from her home land being brought from Africa to America and that mercy that brought her to America was from God. Wheatley has learned whom God is and is aware of the life through Christ on Earth and is now saved, having no prior knowledge or need of the redemption of her soul. Wheatley thought that from leaving her pagan land she would experience wonderful things. Her poem reflects the idea of Calvinism, and the knowledge that she is aware of including a predestination that there’s a God with a specific plan for everything. Wheatley expresses, “’Twas mercy brought me from my Pagan land, Taught my benighted soul to understand that there’s a God, that there’s a Saviour too” (3). Wheatley saw redemption through her Christianity. She was aware that other slaves were on the same journey that she experienced, she warned the rest telling them to stick to their religion and God before joining the “angelic” train. The journey these slaves endured was evil. By joining the Christian faith anyone could be saved. A puzzled mind and a deep hurt in my heart lingers for the lives of those who were lost in this voyage. For the voices that were never heard when they longed for help. For every single tear that hit that wood floor on that ship. The cries that were heard but ignored. They could not move being stuck, sweaty, and fatigued. Those who were ridiculed, were the joke of the century. These tortured souls could not tell the difference between day and night. The positions were uncomfortable all were sleep deprived. The owners who sold these slaves didn’t have sympathy nor any empathy that these people had hope and dreams. They had families back in their pagan land. Even though they knew that they were going on a voyage, they did not know that they were going to experience hell. Even if they did go through horrific times, they sought for relief once coming off this journey by finding redemption through Christ and the images in their head they had of their pagan land. Their stories will forever be alive in our minds.

The Hope From Within
Philis Wheatly a known slave and poet had wrote poetry in which gave us…
2 years ago - by Kelsey Sanchez Previous
To pass the time
It is impressive how much depth an image can have. As I was looking for…
2 years ago - by Cristian A Tejeda
Next