Written by Richard Desjardin
2 years ago 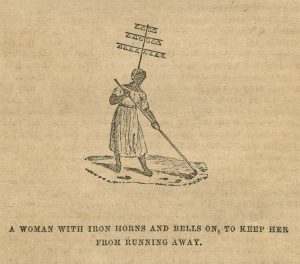 The very idea and nature of the transatlantic slave trade was extremely flawed and inhumane on so many levels. Going through the New York Public Library’s Digital Archive I stumbled upon an image of a female slave with bells attached to her that hung over her head while she was working so she could not run away or escape, she was simply a possession. Similar to the image of the female slave with bells attached to her as she worked, Phillis Wheatley a slave poet, also was a possession, by her master John Wheatley and Susanna Wheatley. Her name indicates that she is property of her master John, and although not a labor slave, her ability to write exceptionally well especially for a slave was exploited. The Africans that we took from their native countries and families suffered various levels of exploitation and the only ones to gain were the white slave owning families.

The image in the New York Public Library’s Digital is titled “A Woman with Iron horns and bells on, to keep her from running away”. The image doesn’t have much of a vivid background and is very small, almost the size of a newspaper or pamphlet advertisement. In the image the slave is cleaning the floor, and she is looking down as the bells tower over her body, which symbolizes how although her owner is not there, the owner is still towering over her through the use of the bells. The white slave owners would do anything to extort their slaves and make sure that what they deemed as “their property” would stay that way. They took out advertisements such as this one and created ways to not only keep a tab on their slaves but send a message to the other slaves that may feel the need to free themselves or take some type of action that did not sit well with their owners.

Juxtaposed to the field slave worker, Phillis Wheatley was extorted in a much different way. Wheatley was taught to read, write and speak by her master and was educated with her master’s children. You can see in her work that she is a more than capable writer. She knew she was a capable writer as well, penning a letter to then General George Washington, and getting her worked published for the literate community which was the same community that enslaved her people. In the engraving of her that is the front piece to her collection of published poems, Her master John Wheatley, has to attach the fact that she is a property of his, by having his name engraved circling and towering over her head, similar to the slave with the bells towering over her head. In her poem “On Being Brought From Africa to America” although most of the poem sounds like she has been enlightened by being a slave and being white-washed she delivers a message to her White-Christian counterparts by saying “Remember, Christians, Negros, black as Cain May be refin’d, and join th’ angelic train” (13) and she tries to take a jab at the notion that slaves and colored people in general can be apart not only of the same religion but that they can also be as good as the white people as well. The whole poem is written with a religious aesthetic, which would cater to the slave owners, who converted these slaves to believe in their religion. She twists the very knowledge of the religion that she is given by her slave owning educators and points out that all can be redeemed through faith.

Slaves were unfairly exploited and used for their abilities and were constantly being looked over and reminded that they belonged to someone. The image of the woman with bells attached to her back and Phillis Wheatley’s image which has her owners name attached alongside her conscious writing shows that the abilities of Africans were being extorted for their various abilities and capabilities for the benefits of the Whites but failed to see that they were limiting and destroying a race and culture for the benefit of their own