Written by Terrell Rozing
2 years ago 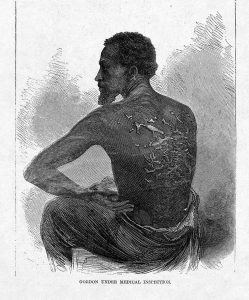 The Reality of Slavery

Oroonoko, written by Aphra Behn in 1688 depicts a romanticized story between Oroonoko and his lover Imoinda. Through their journey, we are able to see the persona of Oroonoko to be placed upon a pedestal, only to be struck by unfortunate circumstances in the end. This text shares drastic similarities with an illustration from the digital collection of The University of Virginia Foundation for the Humanities, “Slavery Images” because both the text and image from the digital archive display the severity of slavery in a raw manner. The image showcases a male slave who appears to have been brutally whipped. While there are moments when Behn’s novel can be read as an oriental romance, particularly when the characters are in the fictionalized African country of Coramantien, Oroonoko also graphically depicts the brutal and realistic side of slavery.

As Oroonoko transitions from royal general to royal slave, we see his character embark on a downward journey. Realizing that his capturers will not release him from slavery when he is a slave in Surinam, Oroonoko creates a revolt with fellow slaves intending to return home. The Governor decides to punish Oroonoko for his actions, despite his vow to end the revolt peacefully. Behn writes: “and whipped them in a most deplorable and inhumane manner, rending the very flesh from their bones… and led him bleeding and naked as he was, and loaded him all over with irons, and then rubbed his wounds to complete their cruelty, with Indian pepper” (93). This passage in the text is evidence of the actual punishment slaves received. Behn describes the removal of “flesh from their bones”, signifying the brutality of the whipping. The imagery created by Behn’s selection of words causes the reader to grasp the torture. To further add to this torture, the wounds were rubbed with “Indian pepper” making even the recovery difficult to cope with. This punishment shares a direct correlation to the illustration, which provides a visual for such brutality.

The illustration is of a male slave who is in a sitting position with his back centered and a side profile of his face. His back is bare and his left hand is reaching towards his back, to bring attention to the marks that cover the skin. These marks are the numerous instances where he was whipped causing scars to form. This illustrations purpose is to support anti-slavery, allowing the world to see the horrors of slave punishment. This particular slave was able to escape and cross union lines during the civil war, allowing his scars to be examined. Oroonoko endures the same treatment as the male from the illustration, depicting the reality revolving slavery. Often referred to as a great man receiving praise throughout the novel, Oroonoko is reduced to merely just a slave. This punishment transitions the character to an unfamiliar reality. The way slaves were reprimanded was inhumane and traumatizing to view.

Behn tells the story of a fictional character with their story ending in tragedy. Oroonoko realizes that this will be the only life for his family after his torture, and decides to kill Imoinda and their unborn child because death was better than bondage. Unable to carry out his plan Oroonoko is captured and suffers a cruel death for his actions. His body is dismembered and used as a warning for other slaves who do not comply. The ending of the text is factual because slaves did not have the privilege of having happy endings. No matter the love they shared or connections that were made death and punishment were not escapable. The male slave from the illustration endured unimaginable torture and pain that was common for a slave. Oroonoko’s story transitioned from a royal stature to the reality of slavery. Punishment for any attempt to escape was severe as the illustration provides the visual for Oroonoko’s consequences.