Written by Kelsey Sanchez
2 years ago 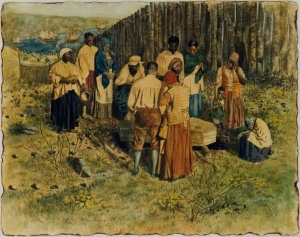 Philis Wheatly a known slave and poet had wrote poetry in which gave us knowledge into her own world. And images among the web have shown us burial grounds for the slaves in which despite the circumstances seemed like a bit of peace for them. In Philis Wheatly poems she shows us a side that some slaves may have owners who believe in educating their slaves. In one of her poems “On being brought from Africa to America” Wheatly shows us how blacks are not considered evil and can believe in god and have faith “Remember, Christians, Negros, black as a Cain, may be refin’d and join th’ angelic train”(line 7). I connected both image and poem together that Africans still had hope still had their own ways of being treated human amongst this time period.

Within viewing from the transatlantic slave trade digital archives I came across this image of a burial ground in which someone is being buried and there’s people around the grave. The way the picture is painted with such color in such a sad time shocked me. The name of this painting from 1994 was named “The African Burial Grounds.” Besides looking at the time period this picture was painted to give the viewer a different impression. Most pictures we come across when it comes to slavery are always pictures of violence of sadness of grief. However this picture although they seem to be laying one to rest it seems more calm more light then dark. I believe what the artist did with this picture is bring light to a time that was so dark but almost contradicted such a horrific time for many of these people especially from the background of this image. This picture was painted upon a finding within New York City. “Archeologists excavated one of the most significant finds in American History: the largest known intact colonial African cemetery.” These burial grounds had stretched more then five city blocks with about 20,000 enslaved African were buried from 1600s to about 1795. In my own opinion I think she shouldn’t have made it so colorful because it can give a viewer a different opinion. The little description under the picture had evoked many emotions in me. Besides the information of the years these ground were a cemetery it also informs us that the bodies that were found where sent off to Howard University to be studied. It bothered me reading that because its like we put them through so much and we cant even let them lay at ease.

It all brings up questions and concerns as to why were never taught this in school. Or why we are taught only one way and not several different ways. I believe if you learned more towards the “owners” that treated their slaves like actual humans the political stance wouldn’t be so harsh. A good political move would be to teach us the good instead of the bad but we as a society fail to see that. We fail to let go of the pain and blood spread that has been our up bringing to better our world our people and children-our society. We all fight to be treated equal and being a whole as a country but fail to realize it starts with us.

Whipping: A Physical Punishment of Slaves
The archive at the University of Virginia for the Humanities, “Slavery Images”, displays an illustration…
2 years ago - by Natalee Sibley Previous
A Journey Through Difficulties
Throughout history, many Africans expressed and physically showed the hardships they faced through slave…
2 years ago - by Darliss Cruz
Next